One of the most important and most overlooked issues you face when writing books, web pages or other important documents is the decision about what font family you will use. For a web page, you could just use the “default” font style – in which case your readers will view your web pages with whatever default font is being used by their operating system and web browser.

On a Windows computer, this font might be anything from Times New Roman or Arial to Calibri or Segoe (the new font that is the default font for Windows 10). These fonts may or may not be very legible.

So if you really want to control the appearance and “readability” of your website and or book layout, then you will want to specify a specific custom font. Today, over half of all websites use some kind of custom font.

A second reason to consider using a custom font is price. While most people using Arial or Calibri for a commercial website do not bother to acquire a license, they are technically in violation of their Microsoft Users Agreement. A commercial license for these fonts could cost hundreds to thousands of dollars per year depending on the number of people buying your book or visiting your business website. We will therefore take a closer at the various Microsoft commercial licensing agreements as this will provide strong motivation to continue reading in order to learn more about free alternatives to Microsoft fonts.

Cost for Microsoft Arial Font License
Most people fail to understand that when they rent a copy of MS Office, they are also only renting the use of associated fonts like Arial and Calibri for creating and sharing personal documents.

For example, if you order a license that covers 10,000 monthly page views, you will remain within your license as long as you do not get more than 10,000 views per month. If your website starts getting more traffic, you will need to place a new order for the additional monthly page views.

There is a third license called an Epub license required if you want to use Arial for an Epub, Ebook or interactive PDF. The price is based on the number of publications. A new version of a book for example will require a new license. There are also Server licenses and Digital Ad licenses, etc. See this website for more details on Arial licensing: https://www.myfonts.com/fonts/microsoft/arial/licensing.html

But wasn’t Arial and several other MS fonts released to the public as part of Core Fonts for the Web?
Core Fonts for the Web was a project started by Microsoft in 1996 in response to several Anti-Trust or Monopoly lawsuits. Even though Microsoft was found guilty in 2000, the US Court of Appeals gave Microsoft a “Get Out of Jail Free” card in late 2001. Thus, Microsoft discontinued this “nice guy” program in August 2002 and went back to playing hard ball Monopoly style.

There are a few ways to legally obtain MS Core Fonts for free for personal use (such as obtaining them from the Linux Mint Software Center). However, these are all older versions of Arial.

Also, even these old files could not be used to “add value to commercial products.” For more information on this topic, see this web page: https://en.wikipedia.org/wiki/Core_fonts_for_the_Web

Therefore, even though Arial and Times New Roman are among the most popular fonts on the Internet, you really should not be using either of them for commercial books or business websites or any other kinds of commercial or business documents unless you purchase a MS license. Information on the three main types of Arial licenses is on this page:

Cost for Microsoft Calibri Font License
In addition, to partially replace MS Arial and New Times Roman and to increase their font patent income, Microsoft introduced a new default Sans font called Calibri and a new Serif companion called Cambria in 2006 for Microsoft Vista OS and MS Office 2007. The default font for MS Office 365 and Word 2016 is still Calibri 11. Calibri is even more expensive than Arial. Here is a page linking to the three main types of licenses. https://www.fonts.com/search/all-fonts?ShowAllFonts=All&searchtext=Calibri

You can get Calibri bundled with Cambria for $299 to use on a website.

Or you can get it bundled with Arial and the rest of the MS fonts for $499. A basic Calibri font set (regular, bold, italic and bold italic) for 1 "core" server use is around $2,000. While these fees may not be much for a major corporation, they can be significant to a small business where every penny counts.

Free Open Source Font Alternatives
In response to Microsoft eliminating support for Core Fonts for the Web in 2002, one of the largest Linux companies, called Red Hat commissioned a group of fonts called Liberation fonts which Red Hat released in 2007 right around the same time Microsoft was introducing Calibri and Cambria as their new default fonts. Liberation Serif is a metric equivalent of Times New Roman – meaning that it will replace New Roman without changing the page layout – and Liberation Sans is a metric equivalent of Arial. Nearly all Linux distributions now come with Liberation Serif and Liberation Sans installed by default. These are also the default fonts for the Linux version of LibreOffice.

Unfortunately, Red Hat made some mistakes in the licensing of Liberation fonts which resulted in the open source community not wanting to further develop these fonts.

In 2010, Google stepped in to solve this problem by creating a new version of Liberation Sans called Arimo. Arimo was specifically created to improve screen readability. Arimo has the added benefit of looking good in both small and large font sizes.

This font is not only free to download and install on your computer, it is also free to use on any website. Here is the link to this font: https://fonts.google.com/specimen/Arimo

It comes in four options: Regular, Regular Italic, Bold and Bold Italic. Here is what these four options look like:

Arimo is a free metric equivalent of both Liberation Sans and Arial. It has been downloaded more than 500,000 times and has been linked to over 800,000 websites.

Why Font Metric Equivalents are So Important
Until the Microsoft monopoly finally ends, it is likely that most documents will be written with one of the three Microsoft fonts: Times New Roman, Arial or Calibri. If you get sent such a document, you may want to be able to edit it without changing the page layout or the page breaks. Also if you want to create Universal Source Documents to share with others that have a predictable layout, you will want to use Arimo, Tinos and Carlito. Even though you may have never heard of any of these fonts, they are likely to be the fonts of the future. 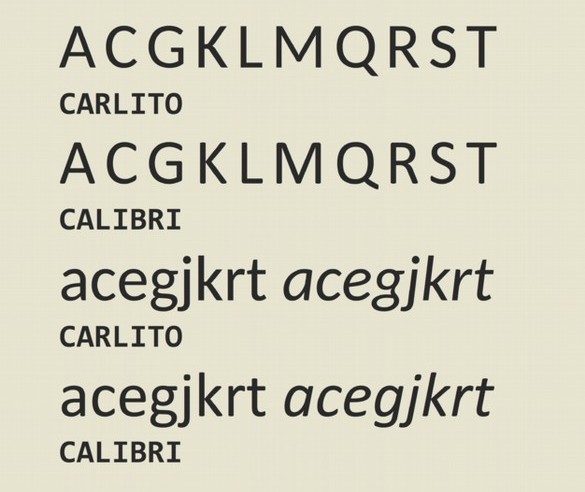 I do not have Times New Roman on my computer and I do not want to install it. Therefore, the following graphic is a comparison of Tinos with Liberation Serif which in turn is nearly identical to Times New Roman: 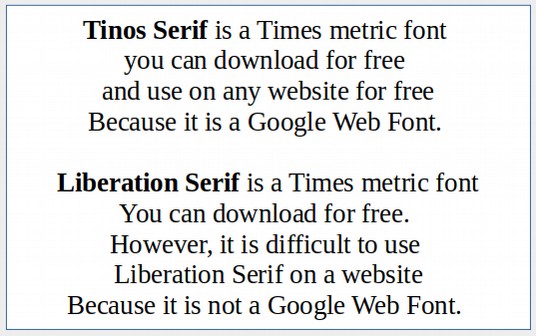 You can see from the above examples that there is virtually no difference between fonts that are metric equivalents. But there is a huge difference in costs and in licensing headaches.

We will therefore next explain how to install these free metric equivalent fonts so they can be used with MS Word and LibreOffice Writer (on either Windows or Linux computers).